Update From Our Missionaries in Belgium

Have you met our missionaries currently serving God in Belgium? Meet Will and Abby Hoc as they share with Pastor Ted about the ministry God has called them to in Oostende and Brussels, Belgium. Listen to a testimony of God’s faithfulness to equip and guide the Hocs as they disciple believers in Belgium. Learn more about Reliance Church missionaries at reliancechurch.org/missionaries.
.

Will and Abby met at Calvary Chapel Bible College in York, England. Will is from Belgium and Abby from California (daughter of Justin and Janie Alfred).They moved to Will’s hometown of Namur, Belgium with the desire to plant a church. Right now Will is working a full-time job in addition to student ministry and Abby is learning to speak French as well as teaching a women’s Bible study with Rachael, an interpreter who is a new believer herself!

Abigail writes: First of all let me thank you for your interest in what the Lord is doing in Belgium. Belgium is what Will would call a “post-catholic” country, where most people have misconceptions about God from the Roman Catholic church, mixed with the impression that the Bible is an outdated book, obscure and irrelevant. There is also a fast-growing Muslim population in the main cities. A large amount of the very few Christians in Belgium are actually of African descent (1st and 2nd generation), we therefore have come to minister with a lot of non-Belgians. The Lord has opened a door for a students ministry in Will’s hometown of Namur, in the form of a weekly bible study, we’ve had it going for over a year now, and the attendance has been a bit inconsistent (between 3 and 12 students). We had the vision to plant a church in Namur, a city that is really lacking in solid bible teaching churches, but doors have not opened for that. In the meantime, Will has been approached by two different churches to consider pastoring them (one of the churches is an international Baptist church that would like to become a Calvary Chapel and is at the other end of the country. The second church is a bit closer to Namur and would offer a one-year pastor internship.)

We could really use your prayers for guidance as we try to discern the Lord’s will. We do want to keep the students’ ministry going, as we have seen much fruit from it. We also have a blog that will take you back to the very beginning of God calling us to Belgium. www.belgiumharvest.blogspot.com If you have any question, please ask. God bless you and thank you for your support!! The Hocs 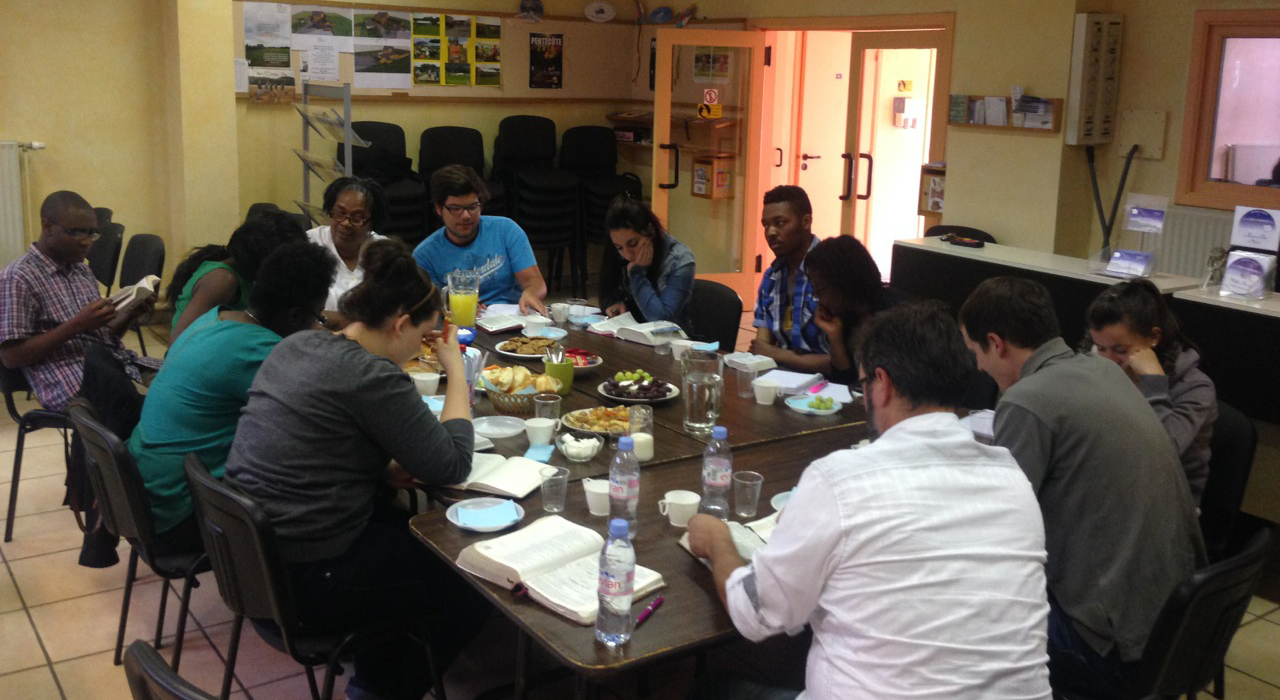 Tonight, Pastor Ted had the honor of teaching these university students (pictured above) out of the book of Acts, Chapters 1 & 2. The students are so hungry for the word of God, they couldn’t get enough! We started at 7pm and they were still willing to go strong come 10pm because they are so interested in what God has to say and His will for their lives. They meet in a little church building every Wednesday night for food, fellowship, prayer, and the study of God’s word. They had so many deep questions and they want to know and understand God in a deeper way. Totally blessed to be here, Will and Abby are very blessed to join God in this work.

Pastor Ted Leavenworth and his wife, Brenda, have arrived in Namur, Belgium. Namur is a picturesque city, but there is a great need for the Gospel. We’ve been able to spend some good time with Guillaume and Abigail Hoc, church planters here in Belgium, accessing the work they are doing and working to encourage them in it. They have been here for almost a year and are doing a fantastic work in this beautiful city where Guillaume was raised. They have a weekly bible study in a local church facility.

Tonight, Brenda has the opportunity to teach the women and encourage them to “be doers of the Word, and not hearers only” (James 1:22) by spending time sitting at the feet of Jesus in a regular time of devotion.The girls were able to express they are overwhelmed at the thought sometimes of reading their bible but were so receptive to the idea of reading if they knew it would help them in their faith. Abby made a wonderful dinner, so we were able to really spend some time with the girls in fellowship. Please pray for these girls and, if you would like, we can gift them with a one-year bible in French! Exciting stuff happening already!

Day 1. Please pray for Will, Abby, this city of Namur, and the girls we were able to minister to in it.