“Now to Him who is able to do exceedingly abundantly above all that we ask or think, according to the power that works in us, to Him be glory in the church by Christ Jesus to all generations, forever and ever. Amen.” Ephesians 3:20-21

This month we’re highlighting our missionaries in Papua New Guinea: Steve and Mindy Clover, and their children, Karah, David and Jonathan.

On March 19th, the Clovers were commissioned to work with the Titan people group of Manus Island, Papua New Guinea. Nearly two weeks later, Steve arrived on Manus Island and traveled by boat to the village of Pere. He started to learn the Titan language, build relationships and work with the translation team on their draft of eleven chapters of Genesis.

At one point, while working with the team on how to translate a biblical concept into the Titan language, Steve realized he was finally doing what God had called their family to do years ago: help a people group translate God’s Word into their own language! A meeting with leaders of another Titan village (M’Bunai) led to their support of the translation team and they have a real desire to have God’s Word in their language.

So far, the Titans have a rough draft of eleven chapters of Genesis and Luke 2: 1-20. The Clover family believes that God will faithfully transform the Titan people through His Word in the language that speaks to their heart and was made by Him: Titan.

The Clovers are asking for your prayer for the following:

Please feel free to contact the Clovers to encourage them and let them know you are praying for them. 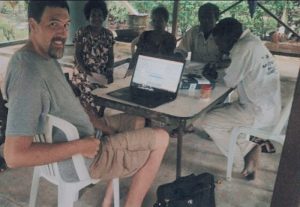